I dismount from Esther and hand the reins to Ide, who takes them without moving her eyes from the torn-up horse on the path. I grab my skean from my saddlebag and hold it to the boy, hilt first.

He blinks again, like he’s trying to bring the hilt into focus. He doesn’t reach out for it.

He’s panting. I continue to hold the knife out to him. Take it, I say without words.

The horse is not bearing weight on her left leg. Her back is hunched and she’s shivering harder now. She lifts the left leg higher and I can see—too clearly—the bones and white tendons moving under the muscles.

I take a step toward the boy.

“Listen to me: your horse is suffering,” I say. They are not my words. They are my father’s. I’ve heard this before. “She won’t recover. You need to ease her pain or let me do it.”

Aideen’s most powerful weapon in novel The Wilding isn’t a weapon at all. It’s her Mercy blade or skean, a tool for ending the suffering of a horse. The introduction of this tool in Eachann is so done deliberately because giving Mercy is one of the most meaningful things we do as horse owners for our beloved partners.

It is almost shameful for a horse owner to not end his or her horse’s suffering.

So shameful, in fact, I’ve been cyber-bullied over a perceived failure to act. I would be lying if I said it didn’t upset me, because, as a horse owner, I’m constantly plagued with the thought “What if I’m letting my horse suffer needlessly? How will I know when it’s the right time?” 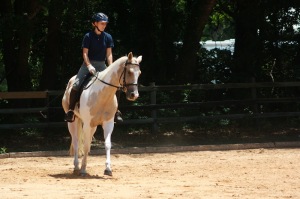 My horse Buttercup was suffering from frequent bouts of laminitis. It took me nearly six years and numerous tests to determine a cause (turns out she’s overly sensitive to herbicides and pesticides used in commercial feed and hay production; she’s now an Organic pony). During this time, I made her into a public figure through a horse forum and a blog called Chronicle of the Hoof. I invited the public to follow our journey.

And it wasn’t a pretty journey. There were bad updates and few good updates. From the outside, it looked like a stalled effort that prolonged the suffering of a poor paint mare. But on the ground, I saw a horse that didn’t lose the light in her eyes. I talked to vets who said the pain was manageable and told me that euthanasia was not the option for this case.

But a handful of people decided they knew better than me and the team of vets. They even posted a poll asking people to vote on whether or not I should euthanize my horse.

I’m a journalist. I’ve been called a lot of things online. My skin is thick, especially when it comes to ignorant bullies. But I’m not ashamed to say I cried and felt a hurt deeper than when I found out my best friend in seventh grade was talking bad about me behind my back (thanks, three-way calling).

I stopped posting on that forum immediately. I didn’t even defend myself. I was already wrestling with trying to make the right decisions for my horse and every day asking if she had had enough. This was just more weight on my heart, because what if they were right?

But they weren’t right. I knew it then, and know it now.

I am a firm believer in not letting any animal suffer. While my horse certainly had bad days, I’d venture to guess she’s pretty happy to be alive. It was a journey I don’t think I could repeat, but I’m glad I advocated for her and figured out a solution that works for her.

But the day will come for all of us to decide on giving Mercy to our horses. And while we fear giving it too late, there is always the fear of giving it too soon.

(Struggling with whether or not you’re making the right decision? Consult your veterinarian, and not a bunch of people on social media or horse forums. And here’s a really good article recommended to me by one of my vet friends specifically to go with this blog posting)

The story of Jacob and Tiffany has uneased some of my fellow equestrians who have talked to me about The Wilding.

I believe we are all more like Jacob than we want to admit. We all have a decision to make when that time comes. We can let nature take its course, or we can intervene and end suffering quickly. At least in Jacob’s scenario, it was clear the horse, Tiffany, was not going recover. But still, he hesitates.

Why? I’ve even found myself getting angry with Jacob for not making the right decision. Here’s a fourteen-year-old, fictional boy, and I’m angry with him. If he was on Facebook, I might have even posted some nasty comment about him needing to “do the right thing.” But Jacob doesn’t deserve my anger. He’s a boy grieving the decision he must make and the loss of his lifelong partner. He needs our support, not our scorn.

A strong person can make the best decision for their horse. An emotionally weakened person will likely be unable to act. If we attack Jacob, we aren’t going to force him into the correct decision. Jacob isn’t a coward. He’s scared and alone for the first time in his life, and is now facing a horrible decision that is every equestrian’s deepest fear.

Strong women build each other up. The same is true for equestrians. We shouldn’t be calling sexually active women sluts any more than we should be calling a fellow equestrian a coward for faltering in the face of his duty. This is heavy shit we deal with. Literally, life and death. Of course any member of the peanut gallery can call into question what’s going on and say we made the wrong call, but a true advocate would be down on the field with us.

I hope we all make the correct call for our horses, and have our fellow equestrians there to offer a shoulder to cry on, because it’s a terrible reality we face. We shouldn’t have to face it alone or under a battery of comments calling us cowards.